The British Wireless Dinner Club came into being after the First World War to keep alive, by means of an annual dinner, wartime associations and friendship.  It was founded by Colonel L F Blandy, an Officer of the Royal Engineers, who had been responsible at GHQ, France, for wireless of the British Expeditionary Force on the Western Front, and who served after the War in the Air Ministry as Controller of Communications.

“…It was always felt that the informal association of wartime comrades (both serving and civilian), together with a list of members and their addresses, was bound to be of value in any national emergency.

This indeed proved to be the case, when in September 1938, the qualifications of the Club were brought to the notice of the Government with the suggestion that they could make good use of the specialist experience of the members. This idea was welcomed and put into effect….”

In January 1922, there was a dinner to discuss the proposition attended by fourteen Officers, who resolved that if sufficient support was forthcoming, a club be formed to hold an annual dinner for members whose qualifications should be that “they had served in wireless during the War as Officers or in an equivalent capacity`.

Membership soon reached about 300. Admiral Sir Henry Jackson, GCB KCVO FRS, was the first President while Vice-Presidency was accepted by Senatore Marconi, GCVO, who, with Jackson working independently, had made England the birthplace of wireless communication.

The object of the Club was to bring together all those who had held His Majesty’s Commission and who had taken an active part in the creation, organisation and operation of wireless communication in any part of the First World War.

The club has met and dined every year since its formation in 1922, apart from 1941, when the Battle of Britain was distracting  the members, and 1944, when the preparations for D-Day were similarly distracting!

We have been privileged to have had many distinguished guest speakers, including royalty (Vice Admiral Lord Louis Mountbatten (1943), HRH The Duke of Edinburgh (1972), and HRH The Princess Royal (2012)), as well as leading figures from the military, intelligence, academic and commercial areas of our ‘charter’ 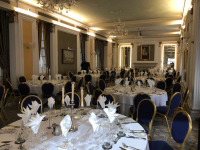 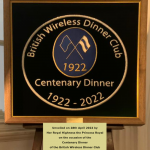 Unveiled by HRH The Princess Royal